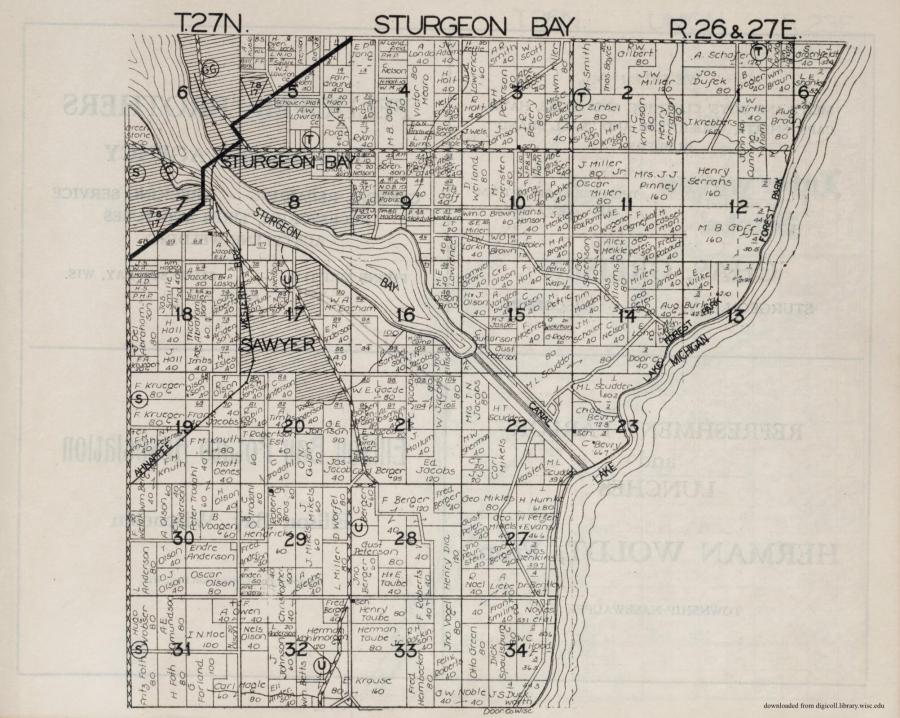 Fred Hamm, my great grandfather, died in Door County in 1951. According to his obituary he is buried in a cemetery at Bailey’s Harbor. (Hubby and I went to find his burial plot a few years back, but no luck finding a headstone in the cemetery for him; had a great brunch in town though.)

For those of you who don’t know, Door County in Wisconsin is one of the ‘go to’ places for tourists, which means if you live in Wisconsin, you avoid it like the plague. Plus, purchasing and owning property up there is extremely expensive. And according to newspaper research, Fred and his son Arthur owned land, possibly together, in the area. I only know this because there were several foreclosure notices in the newspaper regarding Bernice, Arthur and Fred, which culminated in the property being sold at auction.

Arthur’s disappearing act no doubt contributed to the money problems that lead to the eventual sale of the property. It looks like Fred was getting some kind of assistance, according to the article below, but not enough to make a difference.

Of course now I was curious as to where exactly this property was located in Door County. So I did a little digging. (Sometimes it is very hard to find plat maps online.) The property is described as being:
SW 1/4 NW 1/4 S15 T27 R26

The fire mentioned in the article above happened in March of 1949, Arthur ‘disappeared’ in April, Bernice divorced him in July, the property started showing up in the paper regarding foreclosure proceedings August 25th, and continued in the paper until the sale in 1952. Fred died in 1951. Poor Bernice was left to deal with the mess.

Well it is not a very exciting post, but I was curious about where Fred was living up in Door County all this time. Now I know. Driving around up there will certainly be a lot easier then heading up to Canada to see the old Shepard cottage, as long as we avoid tourist season. Plus, I know a great place to get brunch.

I am finding that newspaper research is becoming my favorite part of genealogy because I have been able to find so many family stories that have become lost, deliberately or just due to the passing of time.

So here I introduce Arthur Albert Hamm. Born in 1922, he was the middle child of my great grandfather Fred Hamm and Emma Paugel. All three of their children were illegitimate, or to be less crass ‘born out of wedlock.’ Fred and Emma did eventually married in 1931, but I am not sure what the hold up was as both were divorced from their previous spouses by 1921.

As per his modus operandi, it is doubtful that Fred was living with the family in 1935. That is the year their youngest son Clarence was killed in an automobile accident. According to the 1940 census, Fred was noted as living in Minnesota in 1935, so my gut is saying that he had probably left shortly after their marriage. Again. All previous research indicates that Grandpa Fred was a love-em and leave-em type of guy, so I don’t know why he would treat this wife any differently.

Fred’s sons, Arthur and Raymond, both joined the Army in 1942. Arthur joined up in January of that year. When Raymond (Alfred) was killed  in Africa in 1943 Art was sent home on furlough to be with his Mother and half-sister for the funeral.

Sometime between 1941 and 1944 he had married, and had two children with Bernice Schultz.

Arthur survived the war and came home to Door County and life went on, as it is wont to do, for a few years, then one day in April of 1949… 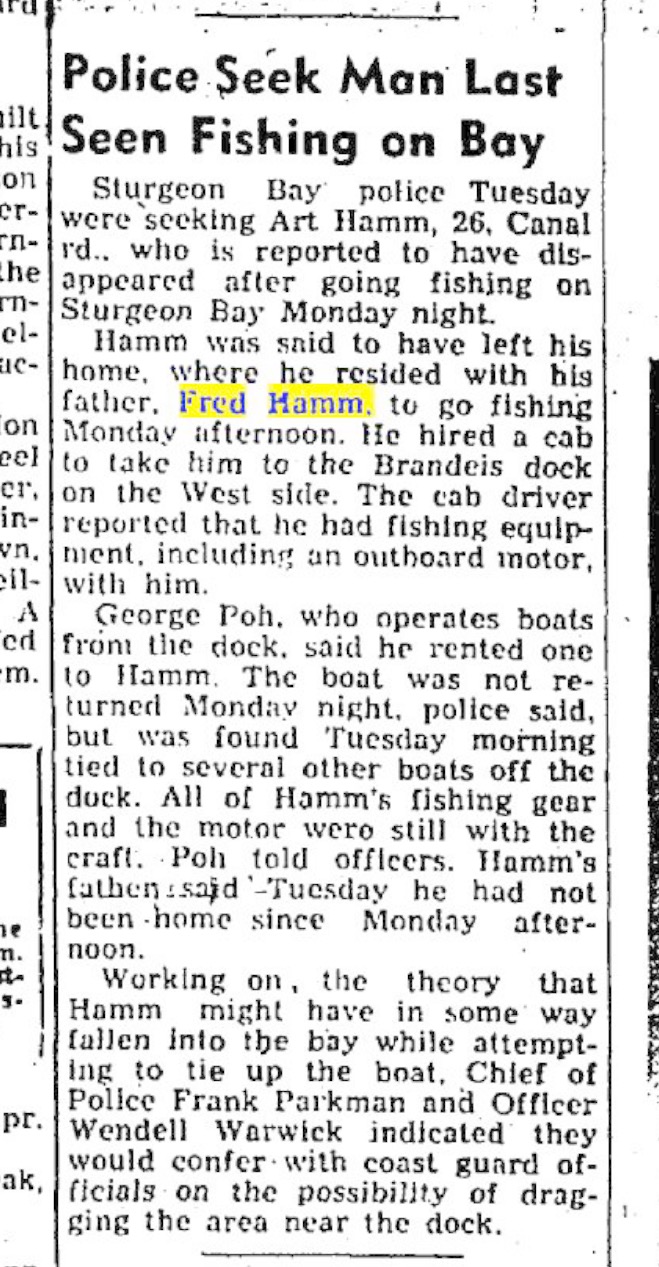 Ah, but here’s the kicker. Arthur Albert Hamm died February 15, 1989 in Livingston, Park County, Montana. Prostate cancer and emphysema were the cause of death.

Arthur A Hamm, 62, of Livingston died Friday Feb 15, 1989 in the afternoon at the Livingston Convalescent Center following an extended illness.
Graveside services will be held Wed. at 2pm at Mountain View Cemetery. Lowry Funeral Home is in charge of arrangements.
Mr. Hamm was born May 5, 1922 in Fairland, MN. He worked in Park County for a number of years as a logger and ranch hand. From 1974-1980, he worked on a seismograph crew in Tulsa, OK. He came back to Livingston in 1981 and had made his home here since. There are no known survivors.”

His wife (ex-wife?) Bernice had told the children he was dead. She later married a man who eventually adopted Art’s children.

I guess in Grandpa Fred’s favor is the fact that a no time did he pretend to die or go missing. As far as we know he pretty much just packed up and left, with no subterfuge. His son Arthur was apparently a bit more of a diva.

Hurray! Miracle of miracles, I have finally found the elusive Fred Hamm in the 1940 census, something I thought was impossible. And, I wasn’t really even looking for him, I was looking for his son Arthur Albert Hamm.

Interesting bits of information can be gleaned from this census. One of the questions asked was where was the person living in 1935. According to Fred, he was in Becker County, Minnesota around the Detroit Lakes area. Arthur and Raymond are living with their father in this census, and in 1935 they had been in Shawano County, most likely with their mother Emma, (who died in 1943).

We know that sometime later in 1940 or early 1941 Fred moved to Door County, Wisconsin where he was working as a Cherry picker ,and possibly farming, until he died in 1951.1 Raymond and Arthur probably moved with him to Door County. It wasn’t long after that both boys joined up – WWII had gotten into full swing.