I know, I know. It has been quite a while since I have posted anything. I apologize to my readers. Happily, ever since being on furlough, I have been able to renew my passion for beading. Projects are bursting out of my head onto the computer then coming off the loom. Unfortunately this has caused genealogy to become less of a priority. Well, I have been doing genealogy pretty consistently for 20 years now, I guess I can take a bit of a break.

This means that my blog has also suffered the consequences of this neglect. I will try to do better in the future. I am even thinking of adding another part to my site where I post my bead projects, that way I can share both of my interests.

On that note, I actually have a smidgen of gossip to share today.

I mentioned in an earlier post about Gertrude Cain John that her husband Victor had been sheriff in 1919 for two terms. Recently I found a notice in the newspaper that I thought was pretty fun.

This is Victor’s notice posted in the Wabeno Northern Advertiser addressed to the citizens of Forest County, Wisconsin that he was running for sheriff. Now, things were not going to be easy for him in this election, two other men were also running. All of them were from Crandon.

But, (spoiler alert) his fellow citizens decided to take a chance and Victor won. In fact, he won twice.

I recently found this wonderful newspaper article about my great grandparents wedding day on August 28, 1897. It would have been even better if they had provided a picture, but no such luck. And as my great grandfather was a railroad station agent and postmaster, the venue was quite appropriate to the occasion. 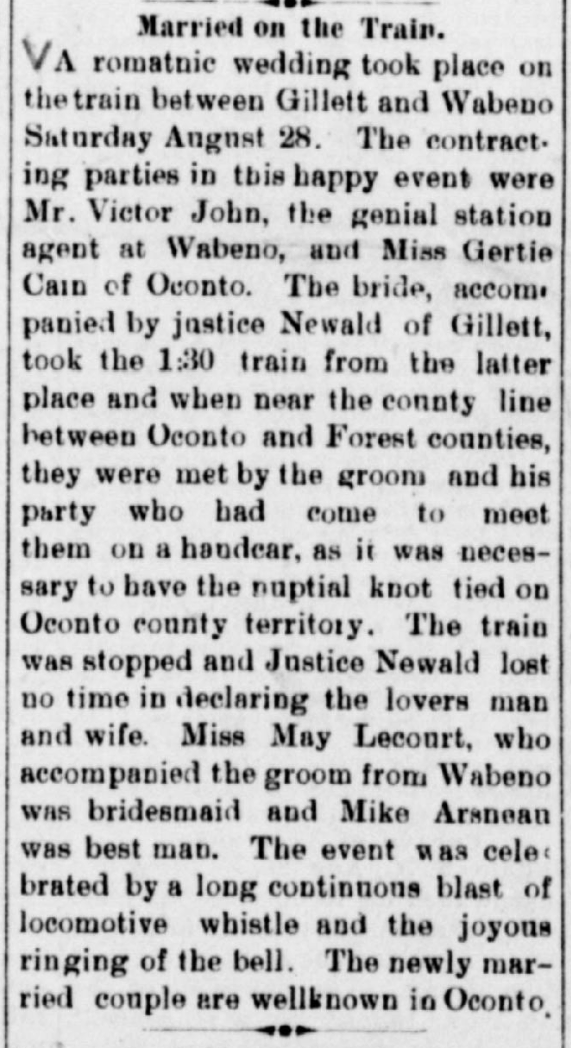