It is amusing, to me anyway, how when we die we suddenly become saints who led exemplary lives, were the epitome of upright citizenry, god fearing moral examples for all, yadda, yadda, yadda (by the way If anyone ever says that about me, it’s all lies!). The same type of thing happens when genealogist write up family histories about their ancestors.  It’s rare to find a family history that says anything bad about their fore bearers. 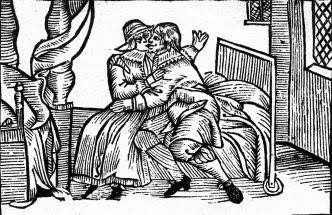 That’s why I love to find records like what I am posting today, records that show even our ancestors were only human. I have had this information for a while, but sometimes there is a long wait before I can post anything new, so I like to go through all my old research to find entries of interest that I might have forgotten about.

Jonathan and Lydia Hatch of Barnstable, Barnstable County, Massachusetts are our focus today both of them are ancestors of ours. Read this little tidbit:

Jonathan Hatch, who eventually married Ann Rowley, was described by the historian Otis as:     … a man of indomitable energy of character – no difficulties discouraged him – no misfortune swayed him from his onward and determined course of life. He was a pioneer in the march of civilization, and the history of his life, if faithfully written, would present many points of romantic interest. (Genealogical Notes of Barnstable Families v1:p463).

Well some of that may indeed be true (he certainly focused a lot on the romantic aspect, but not in the way we think), but those New England winters must have gotten quite boring because Jonathan and his sister Lydia seem to have spent a bit of time in court, and not in a good way, as can seen in the following court record entries that I have entered below.

(1) p.152 – …In 1642 Lydia Hatch appeared before the court not only “for suffering Edward Michell to attempt to abuse her body by uncleanness” and not letting it be known, but for “lying in the same bed with her brother Jonathan.” Her brother was not directly accused of incest, although he was in court on other charges. Lydia was publicly whipped for both offenses, no option of a fine being given, and Jonathan was also whipped for vagrancy and “for his misdemeanors.“

(2) March 1, 1641/1642 Bradford, G. (PCR 2:35):
Edward Michell, for his lude [and] sodomitacall practives tending to sodomye with Edward Preston, and other lude carryages with Lydia Hatch, is centured to be presently whipt at Plymouth, at the publike place, and once more at Barnestable, kin convenyent tyme, in the presence of Mr. Freeman and the committees of the said towne.

March 1, 1641/1642 Bradford, G. (PCR 2:35):
Lydia Hatch, for suffering Edward Michell to attempt to abuse her body by vncleanesse, [and] did not discouer it, [and] lying the same bed with her brother Jonathan, is censured to be publickly whipt; was accordingly donn.

March 6, 1665/1666 (GC, PCR 4:117):
Wheras Jonathan Hatch hath bine convicted of vnnesesarie frequenting the house of Thomas Crippin, and therby hath giuen occation of suspision of dishonest behauior towards Francis, the wife of the said Crippin, the Court hath admonished him and warned him for the future not to giue such occation of suspision as aforsaid by his soe frequently resorting to the said house or by coming in the companie of the said woman, as hee will anware it att his peril.

———————————-
(1)The entries above were found in James and Patricia Scott Deetz, The Times of Their Lives: Life, Love, and Death in the Plymouth Colony, (New York: W.H. Freeman and Co., 2000), 151-152. With other sources listed, Other information found at the website related to book: http://etext.lib.virginia.edu/users/deetz/Plymouth/Lauria2.html

(2) Appendix II: The Court Records  The following descriptions of Court Records provide the date of the record, the Plymouth Colony Record (PCR0 cite, and an indication of the Court at which the action occurred, including the General Court 9GC0, the Court of Assistant (CA), Court of Magistrates (CM) (typically conducted by individual Assistants), and Governor Bradford hearing disputes and claims as an Assistant or Magistrate (Bradford).