During WWII my grandfather Clarence Fredrick John was too old to join as a soldier, being about 45 years of age. However, his expertise in road building, that he acquired working for the Forestry department in CCC camps in Wisconsin, was put to use in Greenland where he helped build runways for the military.

Clarence left his wife and 3 children for about a year to do his part to assist in the cause. Below is his SS Fairfax passenger list entry, after its arrival back in the US, at Boston at the end of December 1943.

During his time in and around Greenland he took, and had taken, many pictures to remember his time there. (Because of all the snow it is difficult to see the details in many of them.) He put together a photo album so that he would have something to show the students in the Crandon Grade School, when he gave a talk to over 400 students, with whom he shared his adventures. 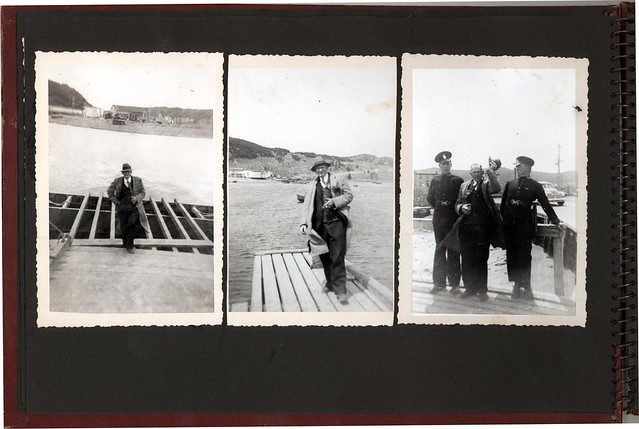 Along with all the wonderful indigenous artifacts that he brought back with him, and the stories of all he saw, there is one picture that he took that is important because of its historical military significance:

The mission was boringly named by Germans as the “German Greenland Expedition,” and it wasn’t their first attempt to establish radio stations in Greenland.

The US Navy haunted the coast of Greenland with the purpose of hunting down and destroying secret radio and weather bases that were being set-up by the enemy in various remote locations around Greenland. And, it wasn’t until  many months after this particular event occurred that the US Navy revealed what had actually happened, no doubt for security reasons.

Early in 1943 this secret base had been discovered, in May it was bombed by Army Air Force planes, and in September it was finally wiped out by a Coast Guard-Army expedition. The Germans occupying the small base had evacuated. But two German soldiers were eventually taken prisoner, one who had been captured and one who stumbled, accidentally, into the hands of the Americans.

The base was on an uninhabited small island off the east coast of Greenland, and had a small contingent of men from the German Navy. It was discovered by a sledge patrol consisting of Danish hunters who kept an eye on the coast for the US Navy while hunting. The two groups engaged in a battle and two Danes ended up being taken prisoner, another was killed. However, there were survivors who managed to get away and report the discovery to the US soldiers. After the battle the Germans banded together a party and headed north with the intentions of attacking the Danish weather station there. With machine guns under the cover of night, they attacked, but most of the Danes managed to escape.

The German commander attempted to get one of the Danish prisoners to collaborate on a mission up the coast, but at the first opportunity the Dane overpowered the Nazi and after a 40 day trip back, delivered him to the Americans.

Not much was left of the base when the Americans were done bombing it, as can be seen in the pictures.

The Germans were pretty persistent and continued making attempts to establish bases, as the Navy encountered several German air patrols and engaged them over the next few months.

Clarence must have been along for the ride when the US soldiers made a trip to the base to make sure it was destroyed. At no time is an exact location given, but it must have been pretty remote for it to take 40 days to get a prisoner back to your allies.

You can read the complete details in the article, which was published in November of 1943. Clarence had a small clipping of the event from another paper in his scrapbook. He didn’t see combat, but he did get to witness an exciting intrigue related to the war. Spies and secret bases oh, my!