It has been several weeks since I have written. Have been very busy. As a f’rinstance I flew 18 hours last week. I am now finished with my first phase. Tomorrow, monday, I start instruments, radio and night flying.

I am getting fatter than a pig. I weigh 190# now. I eat to darn much. I was turned down for fighter pilot because of heigth so It dont matter so much. Ill try next for attact aviation. If the war keeps on at the rate its going Ill never 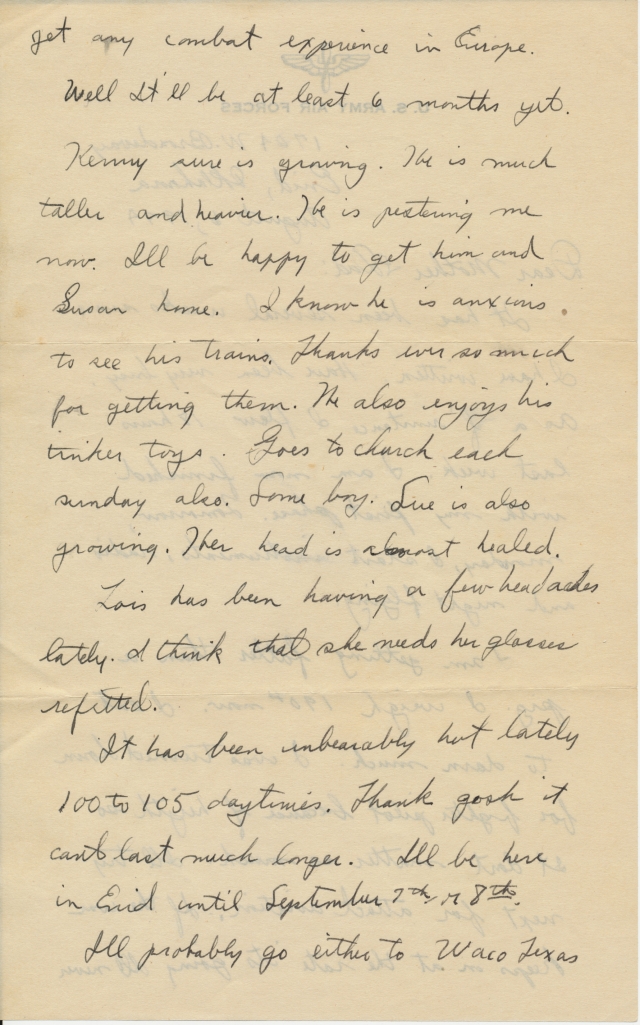 get any combat experience in Europe, Well It’ll be at least 6 months yet.

Kenny sure is growing. He is much taller and heavier. He is pestering me now. Ill be happy to get him and Susan home. I know he is anxious to see his trains. Thanks ever so much for getting them. He also enjoys his tinker toys. Goes to church sunday also. Some  boy. Sue is also growing. Her head is almost healed.

Lois has been having a few headaches lately. I think that she needs her glasses refitted.

It has been unbearably hot lately 100 to 105 daytimes. Thank gosh it can’t last much longer. Ill be here in Enid until September 7th, or 8th.

or to Altus, Oklahoma. Ill get multi-engine training.

Lois & I have been getting out a little now. We have a  crowd here. Pennochle playing deluxe. We went out last night & saw ‘Gaslight” with Ingrid Bergman & Chas Boyer. It was O.K.

Well Ill close & wish you good fishing. I don’t get to write much so Ill try & get another letter out in a week or so.

Have a good time in Canada.