My 3xgreat Uncle Fredrick (Fritz) Isserstedt, jr. was the only son of Fredrick and Wilhelmena Isserstedt. He was born in Gotha, Germany on the 8th of March in 1852. And was only 3 years old when the family made  their 49 day voyage over the Atlantic Ocean to America on the ship ‘Elise Rühke.’

When he was 29 years old Fritz married Phoebe Coon in Sheboygan County, Wisconsin, where the Isserstedts had established their new home. A few years later, in 1886, Fritz and Phoebe ‘purchased’ land from Phoebe’s parents Benjamin and Philena Coon. But this wasn’t just a simple transfer of money for property, there were some interesting stipulations with this purchase.

This indenture made this 5th day of Feb. 1886 between Benjamin Orrin Coon and Philena R. Coon his wife all of Sheboygan County Wisconsin parties of the first part and F. J. Isserstedt of said County party of the second part.

It is further agreed between the parties that a failure to perform any of the conditions of the foregoing agreement shall under this conveyance absolutely void and the party of the second part shall become a tenant at sufferance of the parties of the first part in case this agreement beomes void as aforesaid and be liable to be recorded as such tenant.

So instead of giving the in-laws money for the property, they made a deal to work the land together with each couple doing their part to share in the profits and expenses as long as the in-laws can continue to live on the land and even move in to any new digs built on the property, if they so desire.

Another example of land records doing more than just showing a transfer of property, here you find some interesting family dynamics. (See documents below.) 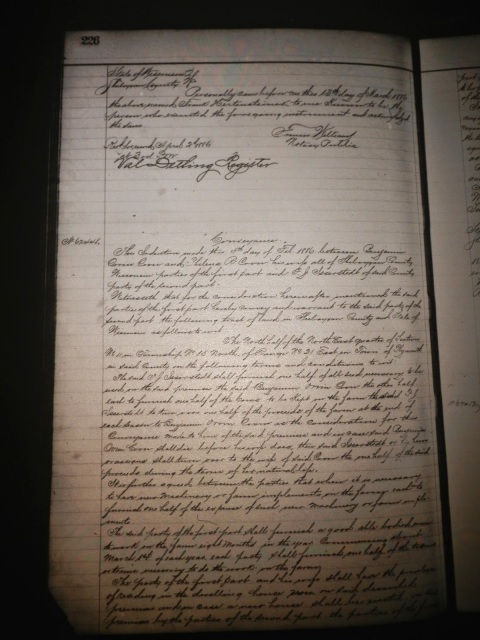