For Christmas last year I took advantage of a sale going on at FTDNA and upgraded my cousin Robert Cain’s DNA results. I upped his yDNA to 111 markers, added the FamilyFinder test, (which will help find cousins), and had some refining marker tests done to suss out more precise information on his haplogroup.

Because Robert passed away a few years ago, his DNA is all we have left of him. And in honor of his memory. and generosity in helping us to find the origins of the CAIN line through DNA, (along with the possibility of his DNA going bad due to time), I wanted to do these tests.

Robert has many yDNA matches, however none of them are less than 5 markers off and none of them are the same surname. So our common ancestor is way, way, way back in time. His updated refined haplogroup designation is:

I added Robert’s yDNA results to the R1b Haplogroup Project a few years ago. Recently one of the group’s administrators provided me with a chart that shows Robert’s new place in this project. All the green cells show how his DNA is being refined until we get to the latest test results. Over time yDNA testing will get even more precise.

What does all this mean? Because the haplogroup R1b is such a huge pool of humans, refining the tests helps group results so that DNA matches are more manageable and more accurate. You can see that none of the group of men with Robert have the same last name. It is assumed that the common ancestor of these men was around about 1100AD, before last names really existed in historical documents. So we know who our CAIN ancestor is, just not his name or where he was from or anything else for that matter, just what his yDNA tells us.

The FamilyFinder test, which finds cousins and other relatives, I had done on Robert’s DNA so that I could see where our DNA was matching. This also helps when comparing it to other relatives and cousins to see where we are matching on our Smith/Cain/Rosa lines. Here is an example: 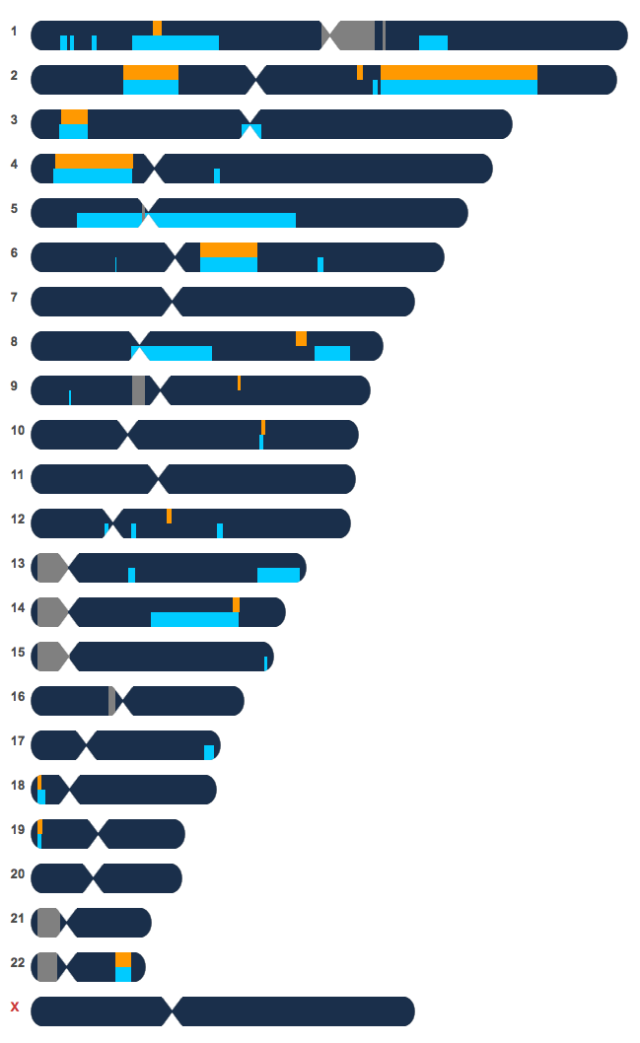 The solid blue/black is Robert, he is the base DNA being compared to. The orange is myself and the light blue is my dad. So you can see what DNA I inherited from the CAIN line that my Dad didn’t, and vice-versa. Ignore the gray bits.

I am not sure how many more tests I will be able to subject Robert’s DNA to, but for now this is a nice improvement on his results. So in a nutshell, we still don’t know the specific origins of Thomas Cain, but we are getting closer.

I have been making the attempt to get out Christmas cards for friends and family this week, in the process I make a quick list to make sure I don’t miss anyone. Last year I had sent a card to Robert Cain, a cousin of ours whom I met through a very helpful librarian in Oconto (after making inquiries about our Cain ancestors at the local library), and hadn’t heard back from him.


Over the years I have stopped in to visit Bob with Dale, alone, and even with Mom and Dad on one trip. He was very helpful and generous with his time and information on our Cain relatives. Without his help it probably would have taken me much longer to break through the road block on this line.


With trepidation I decided to check the SSDI in an attempt to make sure he was still around to receive my Christmas card for this year. Sadly, I found his name listed in the updated database. He passed away September 30 of this year. I imagine that the reason he didn’t send a card last year was he was too ill. Now I am sorry that I wasn’t able to take the time to visit one last time this last year.

Born December 09, 1921 – Died September 30, 2011
Robert Samuel Cain, a lifetime resident of Oconto died September 30, 2011. Robert was born December 9, 1921 in Oconto to the late James and Maude (Anderson) Cain. He attended Jefferson School and graduated from Oconto High School in 1940. He worked at the A&P Stores in Oconto, Green Bay and Marinette. Bob attended the University of Wisconsin in Madison until he joined the United States Army.  serving for three years and eight months in England and France as a Technical Sargent. Bob later attended Ripon College, and George William College in Chicago, finally graduating with a Bachelor of Science Degree from Oshkosh State College. After teaching elementary school for five years, Bob attended a Benedictine Monastery for a time. Eventually, he moved back to Oconto to the house he had grown up in, next to his brother Harold and his family, and spent many years taking care of his mother. A few years ago he retired to Bay Shore Pines in Oconto as his health was declining. Bob enjoyed reading, playing piano, gardening, and spending time with his family.
I remember his kindness and generosity. He was also a bit old-fashioned. In conversations about technology he definitely was a bit of a luddite. One amusing bit I recall is that he loved inviting the religious groups that knock on your door in to discuss their philosophy and other religious issues. Not a thing most folks would do, but he loved the conversations.
I am sad that he has passed.