This tavern might not be as infamous as the Fay’s tavern, but it was certainly older. Welcome to Nieu Amsterdam!

My ancestor on my father’s side, Andries Rees is believed to have arrived in New Amsterdam around the 1650s with his wife Celjite Jans and their son Willem. Andries was actually born in Lipstadt, Germany. His move to New Amsterdam was because his employer, the West India Company, required his, and his fellow soldiers, presence in the new settlement. By 1660 Andries and his wife Celjite were busy running a tavern, the location of which is circled in the map below in red. (Present day this is an office building, the funky wall going across the peninsula is now Wall Street.)

While the Rees’s tavern itself isn’t famous for who was there, it is a historical landmark because of when it was around as can be seen in the historical marker below.

Here, in 1660, Andries Rees ran a tavern serving his fellow colonists. Taverns were lively centers of social life in the Netherlands, and Dutch settlers carried the tradition across the Atlantic. Entrepreneurs like Rees sold rum and wine imported from the Caribbean and Europe, as well as locally-brewed beer. Drunkenness and tavern violence were problems in Nieuw Amsterdam. In 1663, Rees was taken to court for not reporting a brawl in which his customer Denys Isaacksen stabbed Pieter Jansen, a mason. He was also charged with breaking the law by selling beer during Sunday church hours. But the city court dismissed charges against him, and Rees apparently stayed in business.
Taverns or “taprooms” also played other roles for townspeople. Men and women came to play ninepins and backgammon, and to share gossip and news. Taverns were settings for business deals and public meetings. The beer that taverns sold earned money for local farmers, millers, and brewers. As with their windmills, canals, and houses, the Dutch imported their taverns to ease life in the New World.

It would have been great to have known about this while my sister an I were in New York visiting a while ago, we were in the area and could have checked it out.

According to histories regarding New Amsterdam, the fashion of the day in the seventeenth century was drinking and gambling. This included young as well as the old. These vices were, no doubt, popular in New Amsterdam because of the lack of other entertainments for the locals, as there were no books, theaters, museums or other distractions for one’s evening entertainment. When the official work or school day was done you either spent your time at home, in the sober environment of your parents, or spouse, or joined in the revelry at the local corner tavern. At the tavern there was drinking, dicing, card playing and many other questionable games to amuse. And apparently in New Amsterdam the licencoiousness was even more prevalent. In fact not only did the men indulge, but women and even the clergy were known to spend many an evening in drunken revelry.


One interesting result of this habit, in New Amsterdam, was that drunkenness was used as an excuse in court cases such as assault. The law also allowed men 24 hours to get sober, if after that time they wanted to denounce any transactions they entered into while they were drunk they were allowed to do so, with no repercussions.


In the seventeenth century ice was in use in taverns to keep their wines cooled. Customers drank from steins and horns, if it was wine, or pewter mugs and steins with lids if it was beer, poorer taverns served beer in wooden bowls. The common fare found in your local New Amsterdam tavern was wine, beer, ale, cider, rum, or gin, which was considered a poor class drink.


Major no-nos in New Amsterdam on a Sunday were, no drinking no gaming no gambling – in other words no fun. Celjite was in court being accused of having ninepins at her house on a Sunday. The can and glass, parts of the game, had been found on a table. Andries said he was not at home, but on watch, and he did not see any drinking at his house during the Sunday preaching. Celjite

“denies that there was any nine pins or drinking at her house, saying that some came to her house, who said that Church was out, and that one had a pin and the other a bowl in the hand, but they did not play. The Schout states that defendant’s wife said she did not know but Church was out, and offered to compound with the Schout.”

The court ended up fining her six guilders.


On June 19 of 1657, having fulfilled his duties as a soldier well Andries was promoted to the rank of Cadet. He and Celitje bought a house on Smits* Street (now William Street) in 1672. The family eventually ended up in Beverwick, now known as Albany. Their son Willem, my ancestor, had descendants that eventually married into the Jeremiah Smith line, Gertrude Cain’s great grandfather on her mother’s side. 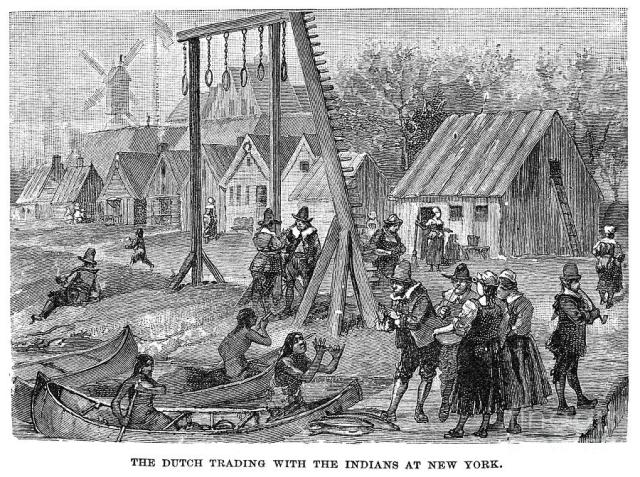 2 thoughts on “Another tavern in the family tree…”