There is an ancestor on the Shepard side of our family by the name of Walter Palmer. He was a Puritan born about 1585 in probably, Yetminster, Dorsetshire, England who emigrated to Salem, Massachusetts in June of 1629. When his daughter Grace married Thomas Minor in Massachusetts in 1634, our Palmer surname line ended. (This line of Minors eventually married a Lantz and daughter Susannah Lantz married Edmund Hays.)

Walter has the honor of being the first ancestor I have run across in my tree who commited murder, and got away with it.

In 1630 a servant by the name of Austen Bratcher was to be punished by whipping, and Walter Palmer, a giant of a man at around 6’4″, was to do the job. Apparently he was quite enthusiastic about his responsibility, so much so, that he killed the man. The charge put forth by the court is stated below:

“the strokes given by Walter Palmer were occasionally the means of death of Austen Bratcher & so to be manslaughter.” 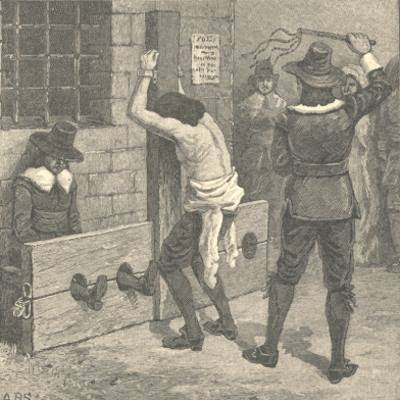 The court records have no details about why  Austen was being punished, but one wonders if the offense merited such an enthusiastic response. A jury trial was held:

One of the witnesses in the trial was William Chesebrough who happened to be a very good friend of Walter’s. William was a gunsmith who traded in illicit goods, such as guns and rum, with the local indiginous people. (Although, he always vehemently denied any such rumors.) Maybe his testimony persuaded the jurors to acquit his good buddy Walter.

After the trial Walter went on with his life as if he had done nothing wrong. His fellow citizens didn’t hold a little murder against him either, he took the Oath of a Freeman on May 18, 1631 (An oath drawn up by the Pilgrims during the early 17th century meant that the person was an established member of a colony who was not under legal restraint, and vowed to defend the Commonwealth and not to conspire to overthrow the government),2 and continued to be a respected member of the community until he died.

So I guess the world being what it is, as usual, being one of the top dogs in town is all it takes to get off of a murder rap.

6 thoughts on “Commits murder and gets away with it”